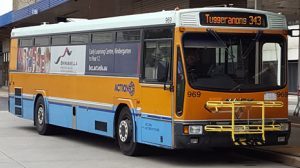 Transport Canberra have released a new Bus Network Proposal for discussion and implementation in January 2019.  They will present at tonight’s Council meeting.

The proposed changes include:

You can also have Your Say by accessing The Survey on Have Your Say Website, e-mailing Transport Canberra or contacting Council with your comments.

Council has met with Transport Canberra and posed a series of Questions to them to which answers have been provided.