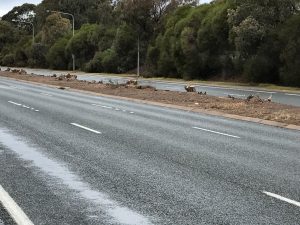 Council has inquired into the removal of the shrubs on Hindmarsh Drive between Larakia and Badimara Streets in Waramanga while the stumps remain.  Transport Canberra and City Services have provided the following response:

The recent removal of the Melaleuca shrubs along Hindmarsh Drive was undertaken because of their failing condition and related safety concerns. Many of the shrubs were in a state of decline and at risk of collapsing onto the road. They were also causing line-of-sight problems for pedestrians, cyclists and vehicles; with buses and other large vehicles frequently hitting them.

The shrub stumps contain a large amount of dirt which would blunt a chainsaw if a lower cut was attempted. Due to the condition of the stumps they will be lowered  progressively over the coming weeks to ground level. The area will then be prepared for the replanting of low growing shrubs in autumn and the following spring.

Transport Canberra and City Services (TCCS) are continuing to undertake assessments of the other Melaleuca shrub plantings in the Woden/Weston region and, as necessary, works will be programed to address any line-of-sight risks and other hazards.