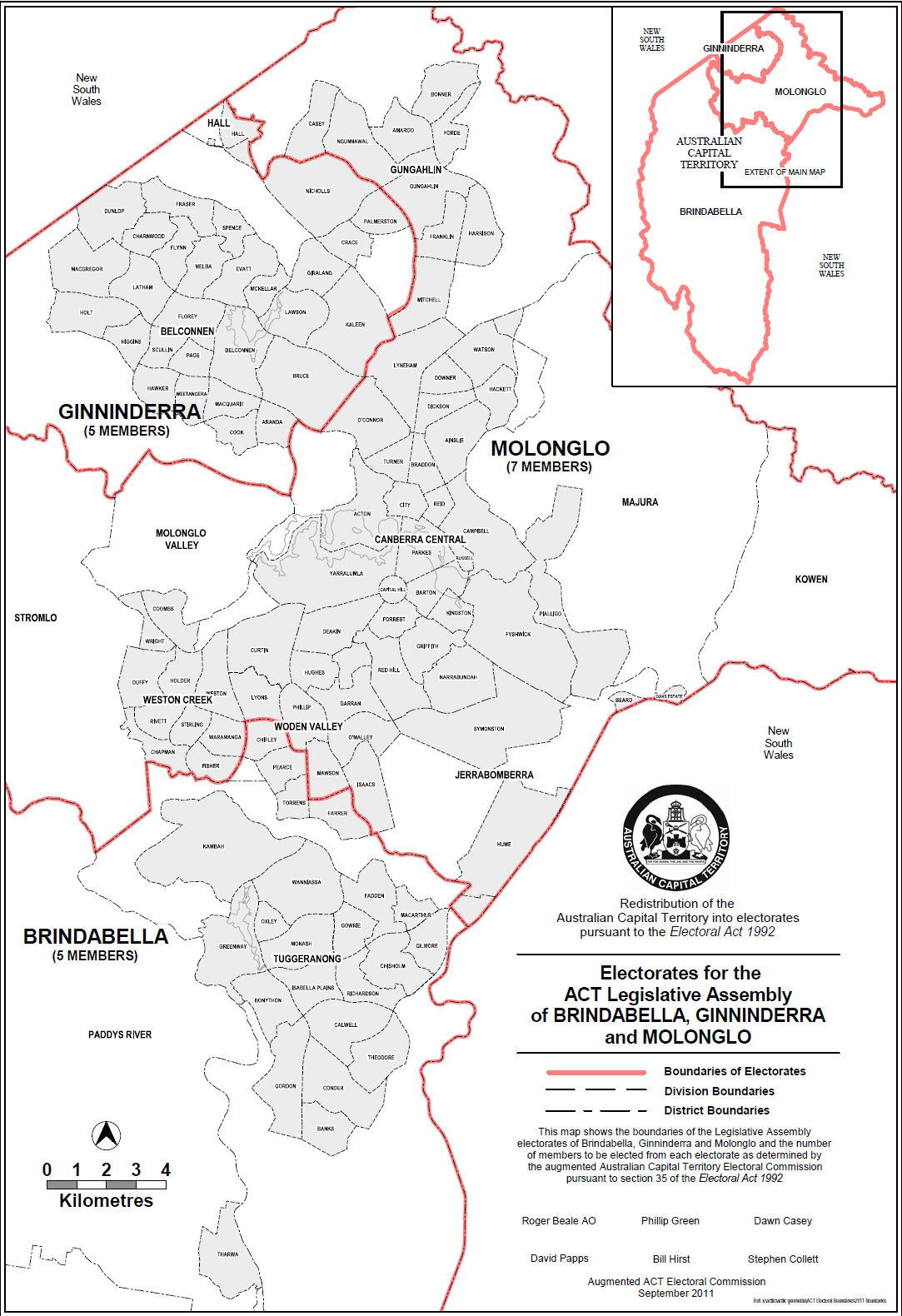 The final make-up of the ACT Legislative Assembly electoral boundaries for the 2012 election has been announced today by the ACT Electoral Commissioner, Mr Phillip Green.

“The Augmented ACT Electoral Commission has decided to alter the existing electoral boundaries by adopting the Redistribution Committee’s proposal to transfer the Gungahlin suburbs of Crace and Palmerston from the electorate of Molonglo to the electorate of Ginninderra. This change has been made to ensure that each of the ACT’s three electorates will be within 5% of the enrolment quota at the time of the 2012 election. The electorate of Brindabella has not been changed,” Mr Green said.

In the Augmented Commission’s detailed reasons, published today, it noted that for the first time in the history of the ACT’s redistribution process, two very different sets of proposed boundaries were put before the ACT community for comment.

“The first option, proposed by the Redistribution Committee, opted for a ‘minimal change’ that would further split the Gungahlin district between two electorates. The second option, proposed by the Augmented Commission, would keep the Gungahlin district in one electorate by moving the location of the 7-Member electorate while splitting the north Canberra suburbs of Lyneham, O’Connor and Turner from the rest of north Canberra.

The Augmented Commission’s reasons for its redistribution are available from the ACT Electoral Commission’s office at North Building, Civic Square, London Circuit, Civic, and from its website at : www.elections.act.gov.au. It is also attached to this information release.

The final electorates are:

BRINDABELLA, a 5-Member electorate comprising the district of Tuggeranong (excluding the suburb of Hume), the Woden Valley suburbs of Chifley, Farrer, Pearce and Torrens and the districts of Booth, Coree, Cotter River, Paddys River, Rendezvous Creek, Tennent and Mount Clear;

A map of the new electorates can be obtained from the ACT Electoral Commission’s website, www.elections.act.gov.au and is attached to this information release.

The redistribution of electoral boundaries will be formally completed by publication of an official instrument and a formal report to the ACT Legislative Assembly.